Each year we organise visits by several music business professionals. Set up as an open question and answer session chaired by a lecturer, we try and uncover as many details about their profession as possible in an hour. We’ve had visits from A & R people to lawyers, publishers to live event promoters, and of course  professional musicians and producers.

This year we heard from  Chris Davies of Bleeding Heart Recordings who told us of his experience of running a DIY record label. Jon Crawley of C3 Audio talked about running one of the biggest south coast P.A. companies and installing his sound systems on the festival circuit. Jonny Aitken told us about his recent experience as the drummer of the band Spiritualized, just before departing for Spain to record their new album with the producer Youth. And who better to interview a drummer than Brighton drumming duo AKDK, both of whom are lecturers on the music production course. 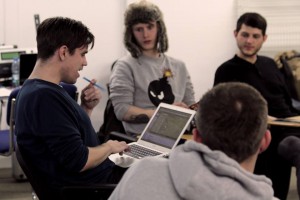 Producer Prince Fatty visited us with his collection of analogue equipment to show how he creates his dubby sound. Then we heard from Tim Rabjohns of landfmusic.com on how to write music for TV and film. We also have an arrangement with landfmusic to share some live briefs with our  interested – and its so brilliant for them to receive real industry feedback on their compositions.

Julian Deane of Raygun Management (who handle  Wytches, and X Certs amongst others) gave some stylistic tips to two of our student groups, and told us about the pitfalls of negotiating your way through the music business. And Kevin Christian Blair told us about his role as A&R person for Rudimental, Ed Sheeran and Skrillex as part of the Warner Asylum label.

Thanks to all involved, and here’s to many more visits next year!