Music at Northbrook were heavily involved in the production of an Alternative Great Escape showcase over the weekend of 14 / 15 / 16 May 2015, in Brighton. The festival has been recruiting volunteers, employing ex-students and being documented by the business students from Northbrook throughout its entire existence. This year, their involvement included the complete technical running of a stage based at Bar Rogue, beneath the Royal Albion Hotel just by the Palace Pier. The weekend was very busy, and the team handled the pressures of the whole production of the event in true professional fashion.

Paul Pascoe’s live sound crew organised what equipment was needed from the tech specs of 28 acts, including many high profile artists such as Mile Me Deaf (Austria), Vök (Iceland), Zun Zun Egui, USA Nails, Barringtone and Francobollo (Sweden). The sound crew loaded the van and were running a separate show on the Wednesday before Great Escape. A late night I’m sure, but a nice warm up for the TGE stage. Arriving on the Thursday morning at 10am, it was all hands on deck.

The crew quickly threw up the PA, set up the backline which NBCOL also provided, and began working the Soundcraft Si digital desk, setting all mics up and lights. The team dealt with all the artists over the weekend, some extremely tight changeovers between bands (20 minutes) and the event managers, Earworm Events to make the event a great success! Artists’ teams were praising the bands throughout the weekend due to their professional approach and stellar technical skills.

The event itself was part organised by a member of staff, who brought the college involvement and representation. NBCOL had banners up, and prospectuses on display, as well as crew T shirts for the team. 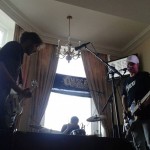 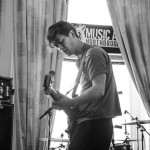 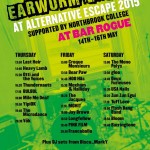 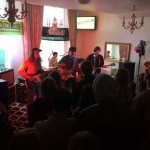 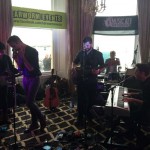 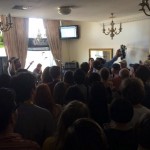